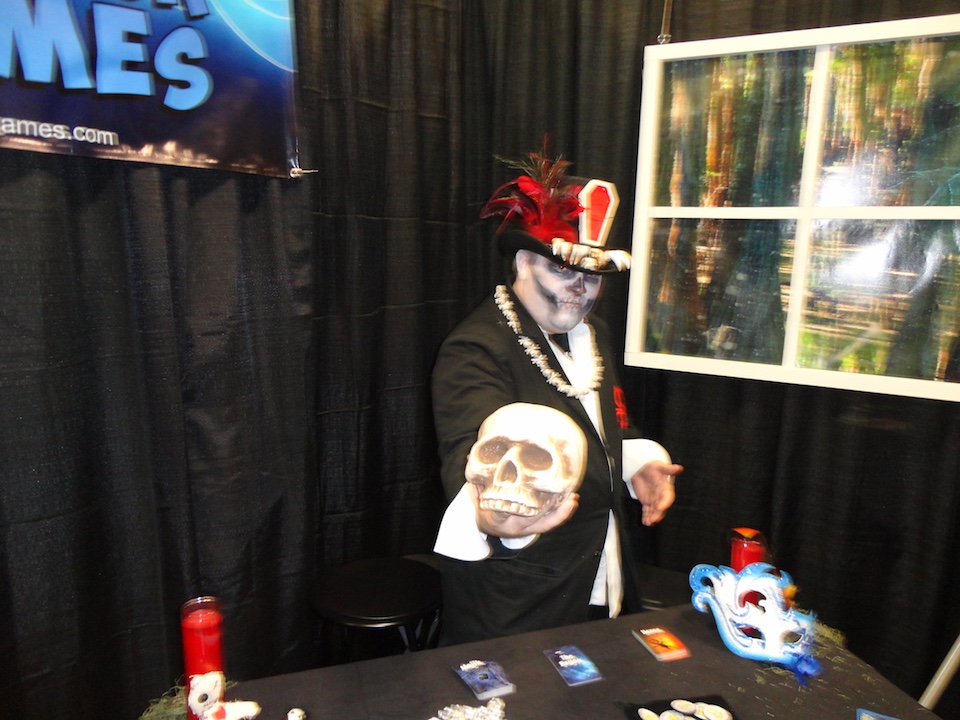 Angry Duck Games brought a Louisiana-styled voodoo essence to its booth, as game designer Michel Grenier enticed onlookers with his skull-faced makeup and shaman priest attire. The makers of the popular Student Bodies board game have dealt up another wicked title, in the form of the chance-filled 13 Souls.

Taking its inspiration from Southern-influenced black magic, 13 Souls pits players against one another as they attempt to gather thirteen souls. You've traveled down to the bayou, where a curse has been laid upon you. In order to walk away from the shaman's tricky grasp, you must be the first to collect the souls before either the others beat you to it or, worse, you are inflicted with three untreatable hexes. As you play, the curses that you're inflicted with will affect the way you experience the voodoo priest's wrath.

You start the game with no souls, a hex, a couple magic cards, and seven cards based on voodoo folklore. Turn order depends on who lays down the highest number from their character pack. With hexes, players will be forced to play the game in some very peculiar ways, be it having to sing everything, rubbing their tummies every time they win a soul, or -- in my case -- forced to play the game with your thumbs stuck together. Forget to do a hex, and you'll have to be cursed, with three curses eliminating you from the game.

Players each take a turn choosing a bayou card that contains a game of chance or a reward. Reward cards can contain certain numbers of souls, which will help you with gaining victory faster. Games of chance are when a need for Vegas-like luck will come in handy. Picking a higher number from the black bag will result in more souls or even getting rid of a hex, with the option to keep on going until you either wish to stop or wind up losing. Losing, on the other hand, could result in another hex befalling you, making it harder for you to walk away from the bayou unscathed. 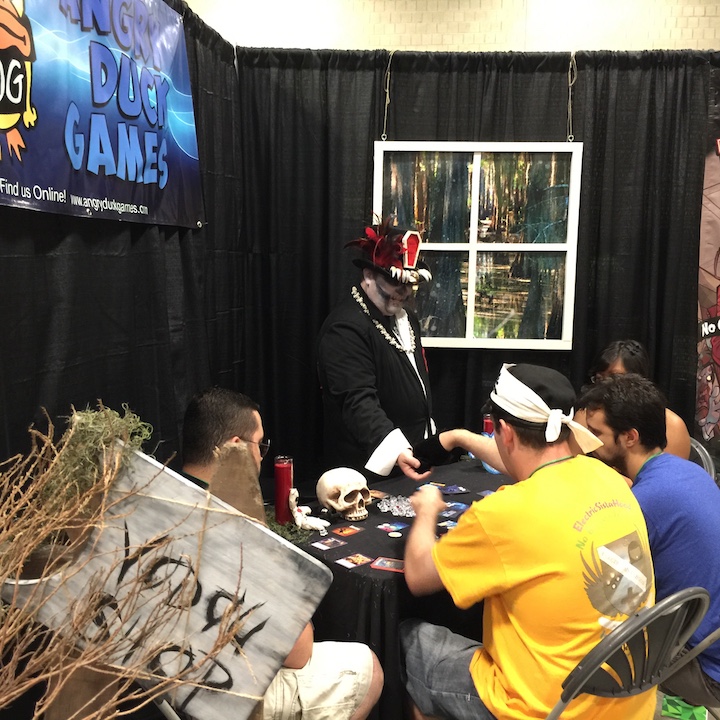 It's when the magic cards are thrown in when players can get very sinister with their turn. There are options to steal souls, pass off their hexes to other players, raise or lower picked numbers for themselves or others, and other scheming techniques that could help your goal while hindering the rest in your game. 13 Souls may let you put your wickedness into full gear, but it also will bring out the most evil of intentions from the other players.

Angry Duck Games' latest title is so far chock filled with fun and darkness, with everyone at the table during my play-throughs laughing and getting into the spirit of things. These sessions lasted between 15-30 minutes, although Grenier has informed me that there have been demos where people went for 2-3 hours due to them constantly dealing out magic and hexes with glee. In short, 13 Souls is looking to be a devil of a good time when the moment comes for it to be unleashed to the masses.

While there is yet to be a release date, Angry Duck Games hopes to try their hand at the crowdfunding market for 13 Souls sometime next year. If successful, there are plans for it to be expansions via bonus packs with various themes ranging from music, film, and even an 18+ set that can make hexes be unleashed in a lovely risqué manner. Needless to say, this is one game you can easily bet their soul on for its future success.