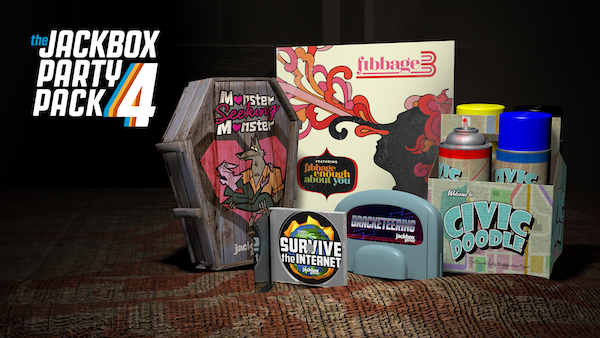 When The Jackbox Party Pack first came out, it revolutionized how multiplayer video games could work at parties. So long as everyone had some kind of smart device, anyone could pick up and play the simple and addictively fun games. As new entries have arrived, there has been a mixed bag of as Jackbox Games has experimented with the formula. Coming off of what was, in my opinion, the best suite of games thus far with The Jackbox Party Pack 3, there was a lot to live up to for The Jackbox Party Pack 4. Some games suffer from overcomplicated rules, but largely this is another fun pack of games that any group can enjoy.

Let's dive right into the games with the one that started it all: Fibbage. The main mode in Fibbage 3 is the same trivia-bending game that we all love, but the latest visual style they've applied to the game is awesome. It evokes a 70s aesthetic while doing some interesting things with eyeballs. The main new draw in Fibbage 3 is the Enough About You mode, where you answer questions about yourself and your friends come up with lies. It's an interesting twist on the original formula that made me feel more connected to the game. It was a little tougher, coming up with some of the answers, but I really like where they took the mode as a whole. 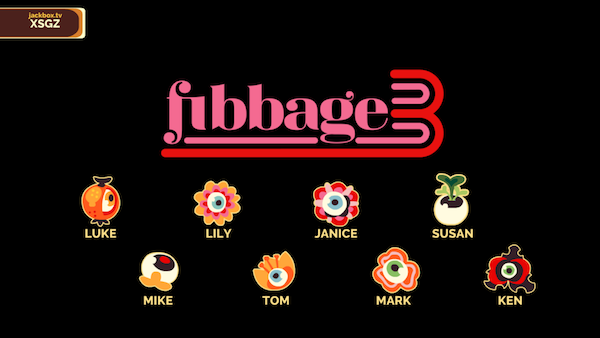 One of the only games in Jackbox Party Pack history that I've ever scored zero in an entire game is Surviving the Internet. The whole concept of the game is that one person answers one prompt and then you give their answer a different prompt in order to make their statement silly. It's similar to Quiplash in that you're scored entirely on how funny you can be, but this time you're writing both the prompt and the joke. Sometimes what results can be a bit more of a dud, but Surviving the Internet makes up with it with its aesthetic. The whole thing is themed around a classic Windows look and is chock full of computer and Internet references.

Every pack has that one game that doesn't quite manage to pull off what it was trying to do. Monster Seeking Monster tried to bring the world of hidden role games to Jackbox. In the game, you seek to score hearts by having each person match together. You'll also have a secret roll that lets you score additional hearts or steal them. Games like Werewolf are among my favorite tabletop games, but Monster Seeking Monster adds just a tad too much complication to the formula. This might be one of those games that could be a blast after a dozen or so games, but that defeats the purpose of the Jackbox games. 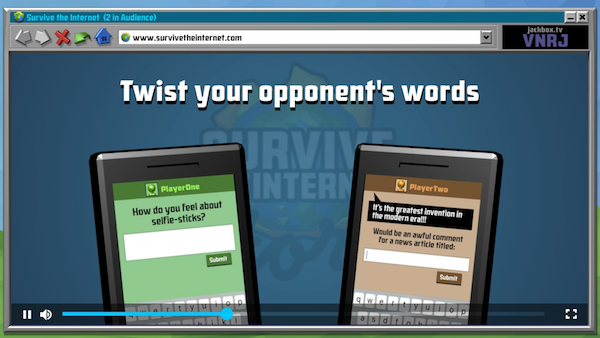 Bracketeering is my favorite of the new games, but it does have its share of issues. In the game, everyone fills in an answer to a question and then each response gets put into a bracket. Each entry then battles it out to become the winner and players can place bets on potential winners along the way. The main issue with Bracketeering is that it doesn't explain itself very well. My first few games, it wasn't very clear how I was scoring points or goals on which I should be focusing. Still, the matchups were often hilarious and the game shakes things up in fun ways as the match progresses.

Drawing games in the party packs have run the gamut from terrible to amazing. Civic Doodle is certainly not the best, but it accomplishes something the other drawing games haven't yet. Collaborative drawing fits with the trend already set in this pack by Surviving the Internet. Players make additions to drawings and folks can use emojis to comment on them in real time. After a few rounds the, usually awful-looking, finished picture is done. The ability for them to have the drawings happening on the TV in real time is impressive when it works well. It doesn't always match up perfectly though, which can interfere with the results of the game. The novelty of the game is fun, but it's not my favorite Jackbox drawing game. 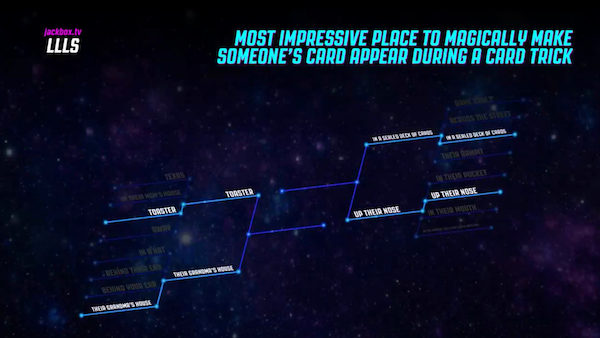 Almost every game in the previous pack was a perfect hit, so there was a lot to live up to with The Jackbox Party 4. Not every game in the pack is great, but there's enough here that I'll be booting it up at my next several parties. Enough About You is an excellent addition to  and the theme of having multiple players manipulate content is unique and seen across multiple games in the pack. Here's hoping Jackbox manages to learn from missteps and make the next party pack even better. You can get The Jackbox Party Pack 4 right now for PC, Mac, PS4, Xbox One, Nintendo Switch and Apple TV.

Look for our annual #CosplayAllDa...