DLC REVIEW | "Friends" To The Rescue in Shantae Expansion

Although Shantae is one of gaming's best (and most underrated) heroines, she often needs the support of those close to her to get the job done. Her closest friends Bolo, Sky, and Rottytops often lend an extra hand in order for the famous purple-haired warrior to gain the victory, but the latest DLC for Shantae: Half-Genie Hero gives the spotlight to all three pals this time around. What could've just been a quick cut-and-paste job instead results in a revisit that adds another dose of life to one of 2016's best video games.

"Friends to the End" takes place after Shantae is transformed into her Nega form by the Dynamo. In order to save Shantae and bring her back to the side of light, Rottytops, Sky, and Bolo are transported into the half-genie's mind to revisit the events that lead to her current state. There the trio tread through the worlds defeating enemies, bosses, and other nuisances that stand in their way with their own unique powers. 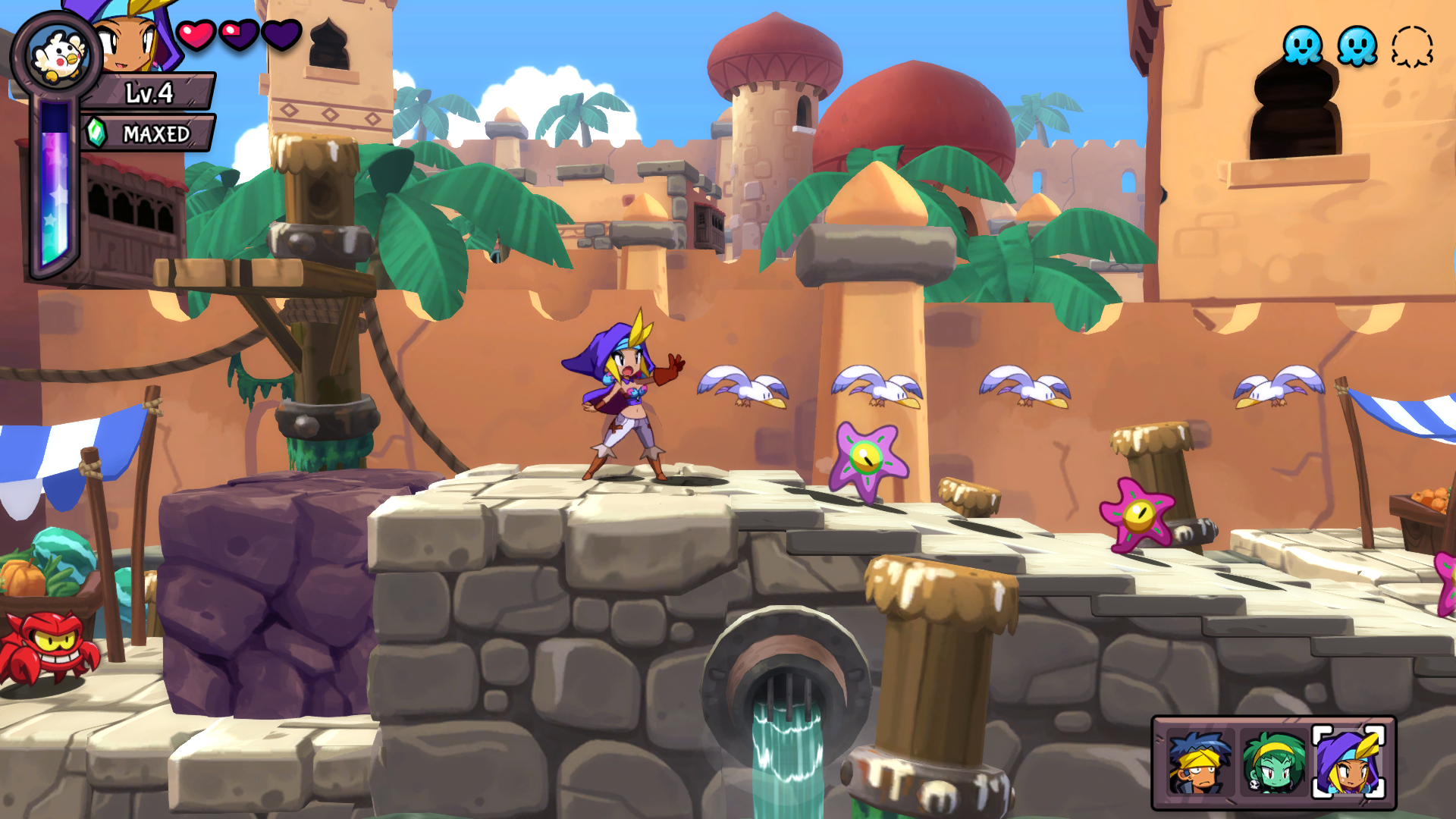 As you find yourself switching between three characters in this mode, you'll often come across places that will require the skills of all three characters. With Sky, you can throw an egg and create a temporary platform. Rottytops has the skill to reach certain heights by aid of throwing her head to another location. Meanwhile Bolo uses his ball-and-chain to grab hooks and swing off them. Because of this change in gameplay, the platforming aspect of Shantae: Half-Genie Hero takes a step back from the main game's mechanics.

Instead "Friends to the End" transforms WayForward's title into an adventurous puzzler. Often I found myself comparing this Shantae DLC to that of the Trine series, where you use three different characters to solve different puzzles and defeat various enemies and bosses. Unlike the previous DLC "Pirate Queen's Quest," there's a certain freshness that's been added to the core gameplay here that Risky Boots' retelling didn't exactly offer. With the exception of the carpet ride race, the game doesn't try to rush you along, but instead welcomes the opportunity to problem solve the situations that are on hand for the trio of pals. 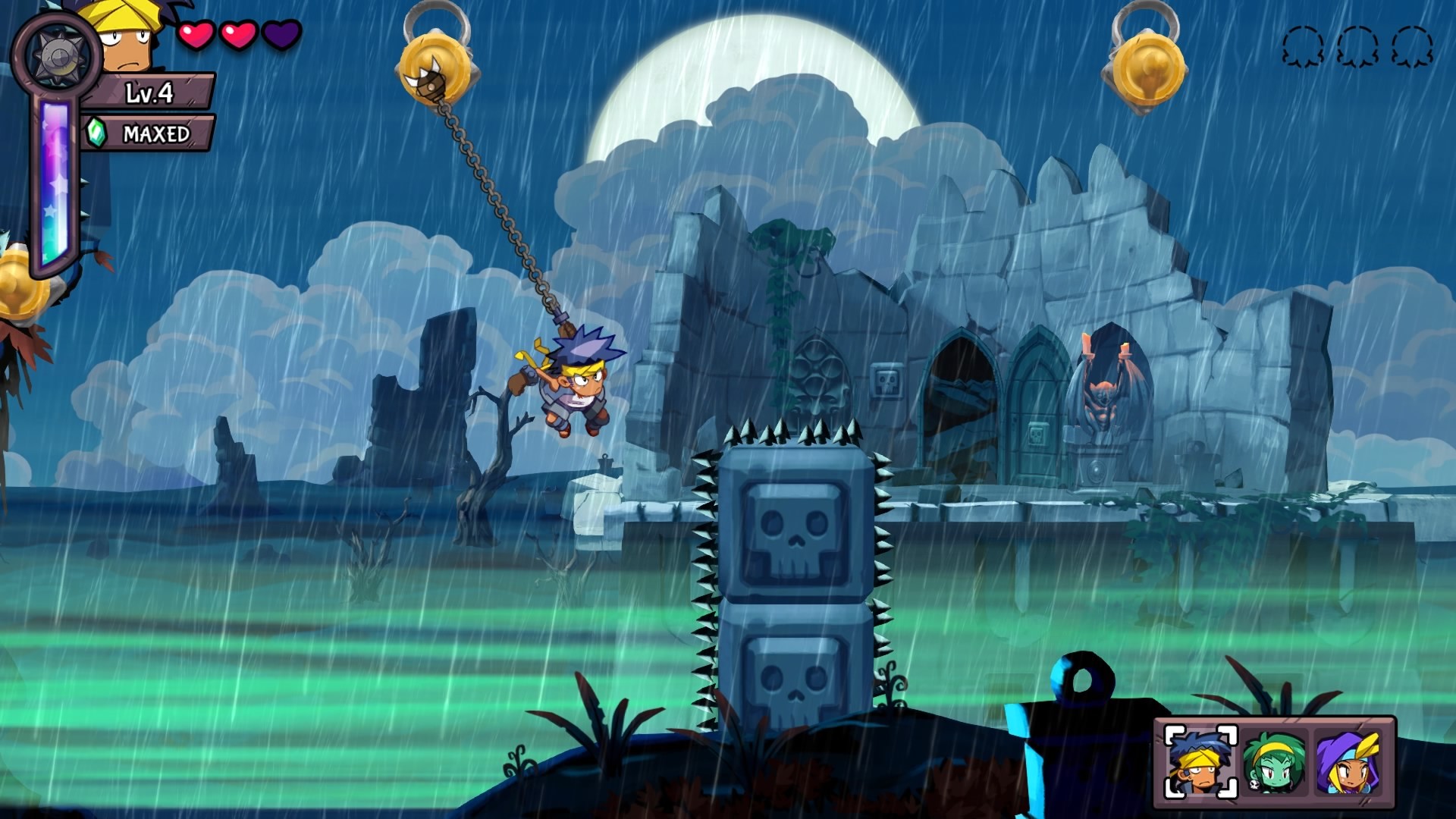 Despite this, there are a couple flaws to this new addition to Shantae: Half-Genie Hero. While the gameplay mechanics are new, the core levels themselves are practically the same as the main game. Although the trial-by-fire technique is fine in the main game, it's a different monster when dealing with certain boss battles (especially when dealing with the Ammo Baron, which beating was more of a pain in the neck than anything else). Even though it was more memorable than "Pirate Queen's Quest," the events in "Friends to the End" lasted much shorter, with the runtime of my game lasting just under 2 ½ hours.

Although it had its flaws, "Friends to the End" is still a wonderful addition to Shantae: Half-Genie Hero. With its newer mechanics, taking control of Sky, Bolo, and Rottytops gives off a far more unique experience that makes revisiting these familiar worlds all the more worth it. With the majority of extra content now out there, one can only imagine what WayForward may have planned next for Shantae in the not-so-distant future.

Kickstarter backed by reviewer. Reviewed on the PS4.