A Place to Kongregate

We’ve all played a flash game at least once. Ten to one, it was probably a tower defense game too. Flash games normally don’t stand up to full console games, and of course there are reasons for that. But what if flash games had a full community, with achievement points, chat rooms, and a place for up-and-coming game developers to show off their early works? 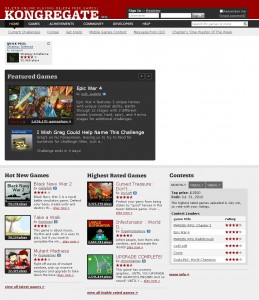 Kongregate is a gaming community that has been around for a few years now. Small companies and independent start-up game developers alike use the site to help promote their games. Even if you’re not a developer, and just want to play these games, you play a large part in the community that makes Kongregate stand out from the crowd. You can comment on and rate each game; games can receive updates to fix bugs, and are occasionally given new “badges” so that gamers can increase their level on Kongregate.

Developers are offered ad revenue for their games being uploaded to Kongregate, with a bonus based on exclusivity to Kongregate and their personal site. The best games get pushed to the front page where many players will see it, and some games will get features where a challenge for that game is placed on the front page that lets players earn something on the site. This can range from a card, for the Kongregate developed multiplayer card game “Kongai” to an entry into a giveaway of a gaming console or game.

The community itself is a great place for developers, and not so much for the actual gamers. The comments on the games really allow the dev to know what people think of the game, what works, and what doesn’t work. The chat room function on Kongregate that also tracks the gamer’s achievement progress, not so much. Occasionally you find a great room where people are having mature conversation, sometimes even about the games. However, having been a member for a couple of years now, I can tell you that the majority of the time you will be faced with religious debates, “what is better” fights, and 12-15 year olds trying to hook up with each other. So really, it’s the same as everywhere else you go.

That said, you could always just not pay attention to the chat, invite some friends to the site, and share favorite games with each other, while having fun. There are a lot of high quality games on Kongregate, and it would be a shame to not try it at least once. Gamestop recently acquired Kongregate, but according to co-founder Jim Greer the site will not change much. Hopefully Gamestop will be able to provide Kongregate with the resources it needs to grow even larger, and not change it from an indie game hub to a pay-as-you-play nightmare.