I had such wonderful plans for my money: food, shelter, gas and toilet paper to name a few.  All of that changed however, when I played a selection of Nintendo’s lineup of games at E3 this year.  Nintendo was clearly the leader of this years E3 in terms of sheer volume of new game announcements and quality titles.  My Wii and DS are going to be working overtime and my wallet is already openly weeping. 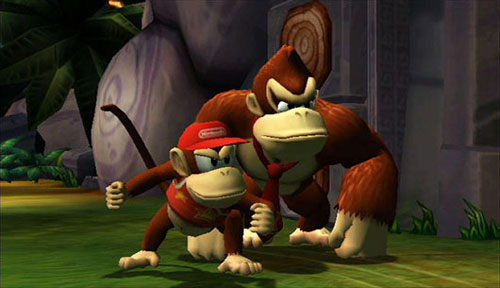 As a huge fan of it on the SNES, my first stop was to check out Donkey Kong Country Returns.  To put it simply, this game is basically New Super Donkey Kong Country Wii.  A lot like New Super Mario Bros, it takes the foundation set by the original game and adds little bits of new things.  You’ll find all the original vine swinging and mine cart racing still there, but you also get co-op play, ground pounding and some plane-switching action.  All of the new stuff feels great and the two-player element really adds another dimension.  There is definitely the potential for some frustration, as both players share a pool of lives, but not nearly as much as the chaos created by the multiplayer in New Super Mario Bros Wii.

The level I got to play was jungle-themed much like those from the original, though there seemed to be a tiki twist to it as well.  The gameplay was extremely easy to jump right into and felt both familiar and fresh.  A lot of the action was your standard DKC platforming, collecting bananas and visiting bonus areas.  One odd thing that caught my eye was the inclusion of jigsaw puzzle pieces that strongly resembles the “Jiggys” of the Banjo Kazooie franchise as collectible items.  One new thing that also stood out was that, every once in a while, a barrel will shoot you into the background.  Once there, you’ll either hop into a bonus barrel or do some action back there in order to progress the level.  I know, it’s not a new concept by any stretch, but it is a welcome addition to the DKC formula.  To sum up, if you are a fan of the original games, then you will be love the feel of playing a Donkey Kong Country game again, if you are new to the series then this will be a great chance to get you into it and if you are not a fan then perhaps you should borrow it from someone who is and see if it doesn’t change your mind. 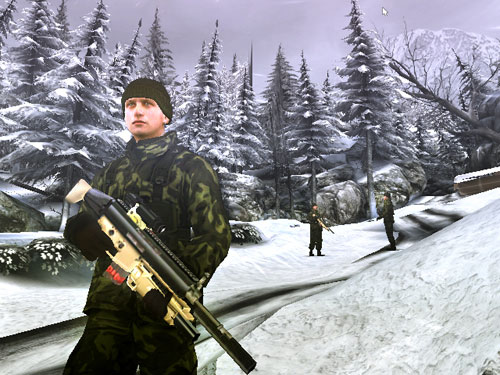 In the interest of heading straight for old favorites, I ran towards Goldeneye 007 next.  Sadly, they did not have a demo of the single player campaign available to play, but they did have some multiplayer set up.  I jumped in as Alec Trevelyan, but was immediately sad that I didn’t pick Odd Job.  While everyone else that was playable threw grenades, our favorite bowler-wearing henchman threw his hat.  We played using classic controller pros and it felt very natural right away.  To be honest, I loved the game, but I was terrible at it.  My butt-kicking aside, the shooting was very smooth and while adapting to how the FPS genre has evolved over the years, it still felt very much like Goldeneye 007.

After that, I saw an opening and dove in at Golden Sun: Dark Dawn.  I will proudly admit that my dog ran from the room and I hurt my voice cheering and clapping when they announced this game at last year’s E3.  Getting my hands on the game, it looks as though I won’t be disappointed.  In the demo at the booth, they had a battling section and a puzzle section to experience.  Mainly, the battle system simply got a facelift and a firmware update.  The 360-view camera pans and grandiose djinn attacks are still there, but better-looking than ever.  The character models, while still remaining in the Golden Sun art style, have a Final Fantasy IV DS feel to them.  Thankfully, the issues such as wasting an attack when an enemy in one spot dies and someone attacks thin air have been addressed.

In the puzzle section of the demo, again it was a mixture of the same formula with some small updates.  You are once again moving statues and pillars with your powers but some new things have been thrown in as well.  In the demo training area there were posters put up that you had to burn down with fire synergy.  Overall, Golden Sun: Dark Dawn looked very pretty, but was also quite familiar.  Is this a bad thing you might ask?  Absolutely not, says I, because that formula, familiar as it may be, was and still is a ton of fun.  I will very likely be clawing at the gate of my nearest DS game retailer when that game ships in Q4 of 2010.

These are just three of the games that I played while basking in the glow of Nintendo’s booth.  I will be back to talk about all the other Nintendo goodness that I experienced, later this week.  Hint: it may or may not involve a legend.