If you're going to start day 1 of E3 off, start it off right. I kicked Day 1 of E3 2015 off with the team at Astro Gaming chatting about their recently updated product line.

That line of products - including a new Mixamp that brings voice chat and control to Xbox One owners who use previous revs of the A40 and A30 headsets - looked great together spread out before me on the table. 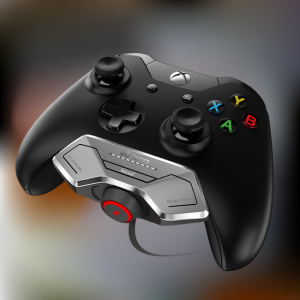 Mixup M80
Bring the boom to your Xbox one with this affordable controller-attaching amp. Available for order today for $60 bucks, it's a no-brainer of an investment for existing A40 owners that yearn for both voice and game audio on their headsets.

I've personally owned a few pairs of Astro headsets - I started with the A30's back in the day then upgraded to A40's (which are now in my sister's care), and currently rock a set of A50's - and have tried lots of other mid-to-high-end headsets from well-known brands, but I've never found any of those other sets to offer the same sound quality, same comfort level, or be as aesthetically appealing as the Astro line.

I was treated to a video reel using a set of the new A40's (with the M80 amp) and everything sounded great. The bass sounded balanced, not overpowered or over done. Mids were crisp and clear, and there was no latency between the console and wireless headset - which is crucial for multiplayer use.

It's no wonder why they own the high-end headset market - nearly 80% of the market to be more specific - and With Astro building the Skullcandy line of gaming headsets, the casual market place may be in for a bit of a shake-up as well.

Be on the lookout: I'll have a review of the Astro A38 Headset - designed for the mobile lifestyle, not gaming - coming soon, and maybe with video.