Mashup genres in video games can often lead to some very innovative ideas. Combining puzzles and RPGs gave us wonderful titles like Puzzle Quest and Puzzles and Dragons. Likewise, with upcoming game Superhot, combining the puzzle genre with a first-person-shooter creates a very fresh-feeling experience. Superhot is a game that started out as a browser-based game for a 7-day challenge and was later fully funded on a Kickstarter campaign.

If one were to simply look at gameplay footage of Superhot being played, they might be confused as to why I’m calling it a puzzle game at all. While you are certainly shooting a gun in the first person, it’s the gameplay loop that really teases the puzzle out of Superhot. Dying in an FPS is frustrating, but every time I died in Superhot it felt more like a lesson in what I was doing wrong and what I could do to fix it. I would then adjust my play to fix that specific problem and then another would arise until all of my enemies fall and the puzzle is solved.

If you haven’t heard of Superhot by now, let me fill you in quickly. It is a first-person game where your goal is to eliminate all of the enemies, but they only move when you do. This allows you to dodge bullets and plan your next move in the moment. If it sounds pretty simple, let me correct that misconception now. Enemies are constantly spawning and the simple act of turning around to find them moves time forward, so it is very easy to get caught unawares by a baddie you just weren’t counting on being right behind you. 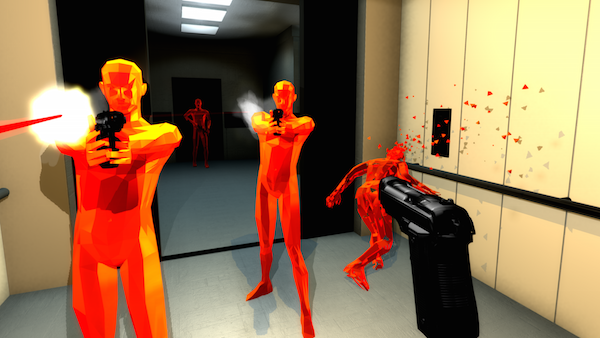 If you’re close enough to an enemy, you can give them a shove and knock the gun right out of their hand. Then, after emptying all of their rounds into their friends, you can throw the empty pistol at another foe to give you enough time to procure a new weapon. The combat is simple enough to learn, but there is an elegance to the execution that takes some practice to really nail.

The unique art style of the gave evokes being dropped into a computer simulation. Your foes are orange and blocky and the world around you is very simply detailed. As you hit an enemy with a bullet, that body part shatters into pieces as they fall backwards dropping to the ground. Occasionally, giant messages with fill your screen like “THEY KEEP COMING,” indicating either the title of a stage or just something going on. The style this game exudes is one of my favorite things about it.

Superhot will be launching fairly soon, there’s no official date yet, for the PC, Mac and Xbox One. Make sure to check it out when that happens so you can experience the awesome puzzle-shooting action!