When comic books were a Panic

Comic books used to be as controversial as video games are today. If something was wrong with society in the early 1950s, comic books were to blame. There were generally two types of comic books to receive the blame: gory horror comics like Tales From the Crypt and humorous comic books like Mad.

The popularity of those two comics was so large that, just as today, dozens of competitors popped up and suddenly, comic book shelves were filled with dozens of gory horror comics and scatalogically humorous comics.

Then they all disappeared. The released of a book in 1954 called Seduction of the Innocent, written by a clinical psychologist, directed parents' attention at the "menace" of comic books. Many of the publishers adopted an industry-wide censorship code. Tales From the Crypt was gone and Mad became a black-and-white magazine, no longer of interest to young children.

But Dark Horse comics is bringing back the thrilling days of yesteryear, or at least a small part of it, with its impending release of the first six issues of Panic, one of those humor magazines.

Not familiar with Panic? Unless you were a comics afficionado (or an old guy like me), you might not be. Panic, unlike all those other Mad competitors, was unique: it was published by the same company as Mad and eventually, the people who started Panic eventually took the place of the whole staff at Mad. 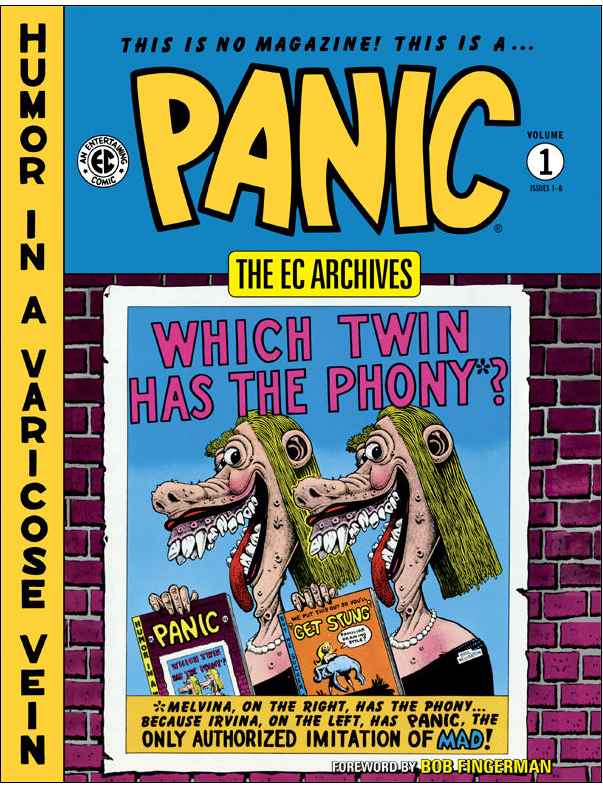 Mad had been chugging along for a couple of years. When publisher William Gaines saw the plethora of competitor spring up, he decided to get in on the act. He even billed Panic as the "only authorized imitation" of Mad, a sentiment not appreciated by Mad's creator Harvey Kurtzman.

Mad had been billing itself as "Humor in a Jugular Vein," Panic called itself "Humor in a Varicose Vein." The editors across the hall were not amused.

Panic caused controversy from its first issue. A parody of "The Night Before Christmas" included a drawing of Santa's sleigh including a sign that reads, "Just Divorced," which upset Catholic readers. After all, Santa is St. Nicholas and saints couldn't be divorced. The comic was banned in Massachusetts.

Also in that issue, a parody of Mickey Spillane's My Gun is the Jury revealed that a buxom woman in the story was actually a transvestite, attracting New York City police to arrest one of the comic book's staff. The charges were later dropped.

Suddenly, Panic was in the same crosshairs as the other comics reviled by dignified society.After 12 issues, it was gone. 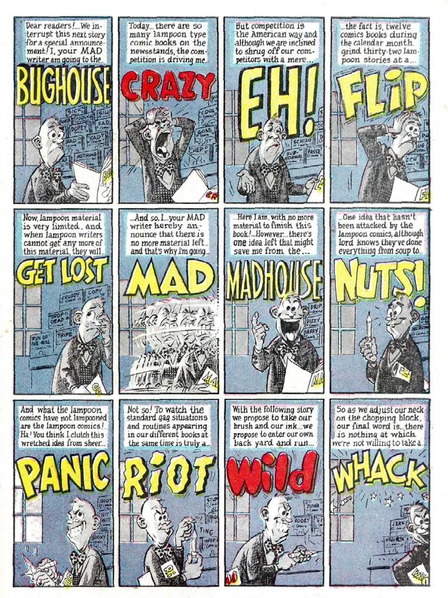 Mad creator Harvey Kurtzman ran this cartoon in issue 17 to lampoon the efforts of competitors of his publication.

Because it turned into a regular magazine (because Gaines refused to sign into the new Comics Code), Mad lived on to become a shrine to 12-year-old boys. I know it was to me. The year of 1968 will always be The Year of Mad. By 1969, I had moved on.

Panic never returned. Those classic 12 issues have been regurgitated by various publishers over the years, and Dark Horse promises the best re-issue yet, releasing the first six issues in a full-color volume next week. It is billed as "Vol. 1," so undoubtedly the last six issues will eventually appear in a "Vol. 2."

It's 216 pages long and available only in a hard-cover printed version for $49.99, but that's a lot cheaper than trying to track down copies from collectors. And it's going to be in much better shape than a 60-year-old comic book.

Of course, what was a controversy in 1953 is just going to sound a little silly today, but that was cutting-edge, risque stuff for the times. Heck, it caused the reformation of the entire industry. But it didn't stop children like me from becoming corrupt. I'm living proof.