Tom Clancy's The Division is more than just a third person shooter. The Division is a loot-based shooter with RPG and tactical elements. The game can be played solo or with a squad of up to 4 players. You can play in the PvE (player vs environment), which is the story mode of the game, or you can play the PvP (player vs player)in the Dark Zone, which is a unique loot-based open multiplayer mode. The game has drawn heavy comparisons to Activision's loot-based shooter, Destiny. However, there are enough differences between the games that it's not quite fair to directly compare the two. I have already played more of The Division than I have Destiny so this is the end of that comparison for purposes of this review.

You play as an activated sleeper agent for the Strategic Homeland Division (The Division) who are called in to assist first emergency responders, the JTF (Joint Task Force), to restore order to the Big Apple. You are also tasked with finding out who is responsible for the viral small pox outbreak, dubbed the “Green Poison” and “The Dollar Flu”, that was transmitted via banknotes on Black Friday. 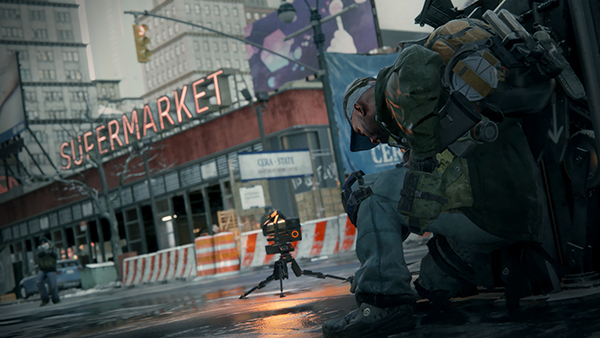 You are able to make a customized character and, while the customization is a bit limited, there are still a good variety of options. Those include gender and race as well as preset faces with skin tone, eye color, and hair color and style. You can also choose scars, tattoos, piercings, and glasses. I felt that there could’ve been more hairstyling choices for the females as well as a wider array of hair color choices. While the character customization is not nearly as in depth as those in games like Fallout 4 or Skyrim, there are still plenty of options available. Could there have been more? The answer is: yes.

One great feature of the game is that you aren’t locked into playing a specific class. In fact, you may change your skills and talents on the fly to suit the mission or to help balance out your squad, should you choose to take on missions as a group. You can have up to 3 skills active, although the third skill does not unlock until later in the game or as quickly as you are able to get your Base of Operations upgraded. Later skills can also be modified which makes them more powerful or adds other abilities to them. Talents are also based upon base upgrades. Your character uses XP (Experience Points) to level up which can be gained by completing missions and encounters, killing enemies, helping citizens, and by finding collectibles like dropped cell phones, intel, missing agents, echoes, and crashed drones. Your main game level is separate from your Dark Zone level (the game’s multiplayer), which will only advance when playing in the Dark Zone. 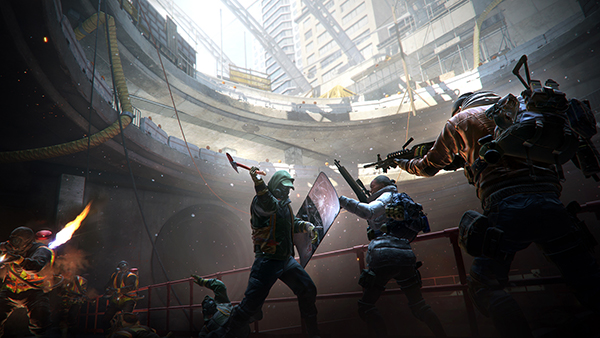 There are a couple of ways that you can approach playing The Division. Of course, you can go through the story mode as a single player, completing the main missions to gain Medical, Tech, and Security credits. These credits are spent to upgrade your Base of Operations, located in a Manhattan post office. These upgrades are very important to the advancement of your character as well as the game’s story line. You will not encounter other players while in your story mode game unless you join another player in a squad. You will see your friends on the map but they will only appear in your game when you are in a squad or in a safe house. Joining friend’s games is easy…you may do so right from the map by highlighting them and joining (or inviting to your game) or you can do so in the Group Management section of the menu. The game features in-game chat but we have found that it doesn’t always work so we just use Xbox Party Chat. 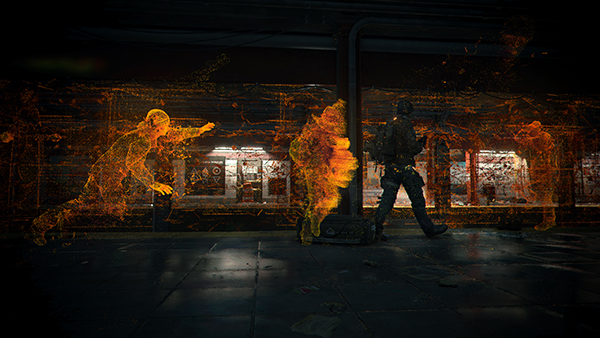 You can also opt to play the game as part of a squad of up to 4 total players. You can do everything in a squad that you can do solo but you have help. The game does find a way to balance levels out by throwing in higher level enemies as well as a higher amount of them at you. The game also attempts to balance the level of the enemies based on your squad members. For example, I played with 3 other players ranging in level from 8-13 and the game saw it fit to have us face level 13 characters. To top it all off we played the mission on HARD, which was, well, REALLY HARD. Another time, I played with a level 5 character while I was level 20 and the game gave us level 15 enemies. I haven’t quite figured out how the game logically calculates the balancing but I think it may require some tweaking.

Lastly, you can forego the story mode and opt to play in the Dark Zone. A lot of time and effort was spent into developing the multiplayer aspect of the game called the Dark Zone. The multiplayer is set up differently than what we are used to - there is no lobby, there is no traditional matchmaking or modes. You simply enter the Dark Zone, whether it be by jumping over a fence, going through a door, or entering via a checkpoint area. It is a seamless transition into a completely different kind of world. Here you will face tougher AI enemies as well as other players. The Dark Zone is the only time when you will see other players in your game (apart from safe houses in the main game). You may team up with these other players to gather loot and defeat the AI enemies, but beware of rogue agents. Rogue agents are live players who have decided to work against other live players by attacking, killing, and stealing their loot. One of the missions in the Dark Zone is when a rogue agent reaches level 5, a manhunt ensues and other players may actively begin to hunt those rogues out - killing them, taking their loot, and gaining XP. Loot gained in the Dark Zone may be a lot better than the loot found in the main game however, I have read that the same loot may be purchased or crafted at some point. Going to the Dark Zone may get it into your hands a lot quicker and for way less credits. But I’m pretty sure that I will get reamed out there as I would just be fodder for those rogue agents! Also, be aware that in-game chat is enabled so you will be able to hear other agents and those agents will be able to hear you (if you have Kinect enabled or a headset plugged in). This can work for or against you depending on your style of play. 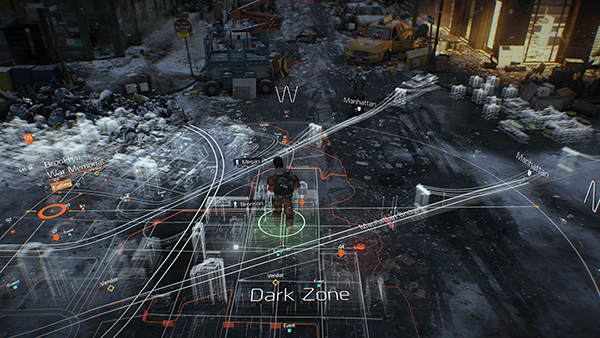 One of the things that sets The Division apart from other shooters is that it is a loot based game, meaning you will have to spend some (a lot of) time going through your loot and coming up with the best combo of armor and weapons for your level. I realized that I had been approaching loot all wrong for the first few levels of my game. You don’t want to be a level 8 character still using a level 4 gun or wearing level 4 armor! The better your loot, the better your character will be against the enemies you face whether they are AI or live players. Bottom line: loot is important to the game and keeping up on it will vastly improve your game as well as be an enjoyable part of it. 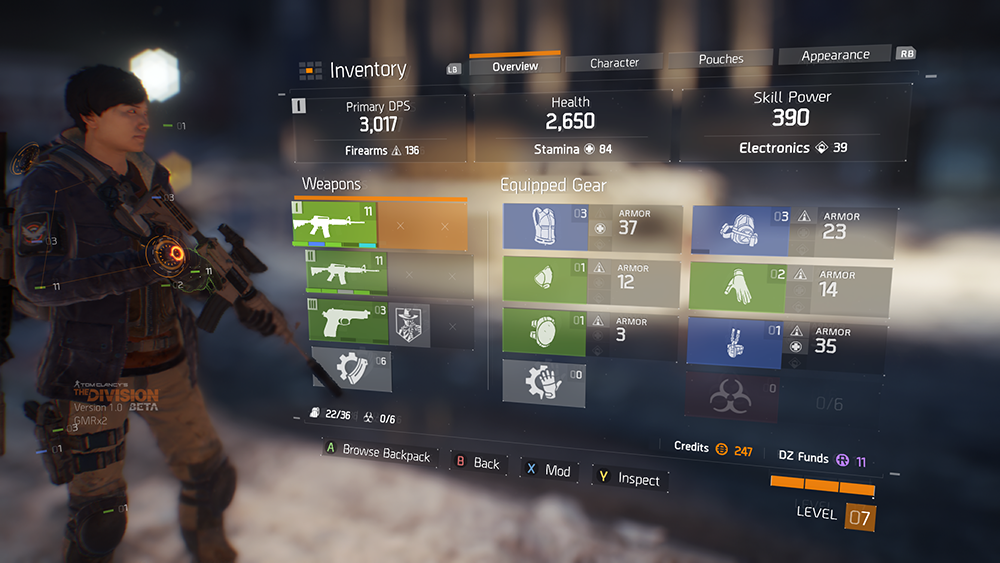 The game is not without its flaws. I have encountered a few glitches, one of which sent me into the deep sea of a level and kept respawning me there. When I was leaving the area, I fell back into that pit. Luckily when I reloaded the game and tried that mission again, it was no longer broken. Another glitch was that the game didn’t register me as being there… AI did’t react to me and my bullets would do no damage. Something finally clicked and I got back into the game again. There have been some sound issues with music and background sound cutting out completely. Most of these have happened while in co-op in the main game.

I have really enjoyed playing The Division, alone and with my friends. It’s definitely a lot more fun with others but there is plenty to do by yourself that you will not be bored. It’s an easy game to jump in and out of without soaking in hours of time. Trust me YOU WILL WANT TO PLAY FOR HOURS, but you can easily play a mission or two and leave. The Division currently caps a player’s main level at 30 and the Dark Zone level at 99. So what does that mean once you hit level 30? What is the end-game? Once you hit level 30, you will get daily challenges which are played by replaying the game’s main missions but at a much higher difficulty level. This must be chosen by changing the level’s difficulty before starting. You will then earn Phoenix credits which will allow you to buy even better weapons that can be purchased only using these credits. That, coupled with a year of planned DLC, makes Tom Clancy’s The Division a game that I will likely be playing for quite a while. This type of shooter will not be for all gamers but that’s OK -- you can’t please everyone. I highly suggest that you and a few friends pick up the game and start playing…you will have a blast.

Tom Clancy's The Division is rated M for Mature and is available now for PC, Xbox One, and PS4. A game code was provided and did not affect the outcome of this review. This review is based on the Xbox One version of the game.

This is a job for Superman (with t...