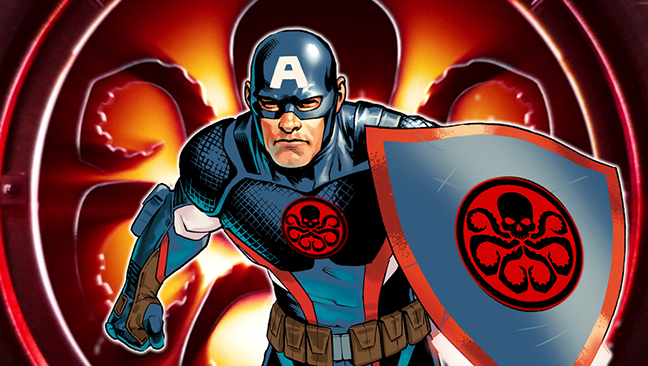 Captain America and the Hydra controversy

People are fighting about Cap

It didn't take very long for the internet to explode with news and comments regarding America's most famous patriotic superhero, Captain America. The details flooded in after fans and comic book readers alike got their hands on Captain's new revamped story arc in the pages of the Marvel comic books.

On May 25, Captain America - Steve Rogers #1 featured a revitalized Steve Rogers character, suited up and back in action in his original role as Captain America. The opening scenes of the issue began to foreshadow events that would lead to the ultimate surprise at the end of the book.

The pages show several never-before-seen flashbacks into Steve's childhood. We learn about his living environment and life with his immediate family as a child. His mother, a domestic abuse victim living in a rough neighborhood, does her very best to provide and look after her son. Meanwhile, Steve's father is shown to be an alcoholic and emotionally unstable due to his vices. In one scene, Mrs. Rogers is almost struck by Steve's father after a small disagreement they had in public. Luckily, a woman named Elisa Sinclair intervenes and restrains Steve's father and sends him on his way.

The woman was presented as being combat savvy and very confident in her skills and position in life. After the incident. she eventually took Mrs. Rogers and Steve out to a late dinner to discuss life, Steve's father and a possible opportunity for the two of them. The woman told Mrs. Rogers that if Steve's father ever acted out like that again, there was something that could be done to prevent it from ever recurring in the future -- she was more than likely talking about murder, since she hints that her husband, who might have also been abusive "is no longer with us."

Finally, at the end of their dinner date, the woman handed Mrs. Rogers a flyer to an event that she would very much like her to attend. On the flyer was the Hydra logo. This is where the revelation is made that Mrs. Rogers was actually being recruited to be a part of the Hydra organization.

Skipping forward to the end of the issue, Rogers is seen on Baron Zemo's jet where he was supposed to find and rescue Erik Selvig. Instead, he threw his partner, Jack Flag, out of the jet's cargo-bay after alluding to the idea that he was just collateral damage.

Afterward, he walked up to the front of the jet and uttered the two words that had everyone going berserk, "Hail Hydra."

So Captain America is now a global terrorist who supports a Nazi organization? UNLIKELY.

Not much is known as to why Marvel would taint the image of America's most iconic superhero, but one thing is certain, Steve Rogers has become the most popular Marvel character of 2016.

Personally, I don't believe that this will be a permanent change. It's not even fully plausible that Steve is actually "evil." Marvel wouldn't throw 75 years of Captain's legacy down the drain for a few extra comic book sales; they have a much greater plan that will more than likely make Cap a hero at the end of it.

The only way I would believe that Rogers spent the last 75 years as a double agent is if in actuality there are two versions of Hydra:

If this is the case that Rogers is indeed Captain Hydra (as fans across the interwebs are calling him), then I'm sure the rest of the Avengers and the Marvel heroes are going to try to stop him, making room for a huge crossover event.

The overall concept of making Captain America a bad guy was a very risky move on Marvels end, especially with how calculated the calendar release for this new title happened to play out:

Their plan was very well put together. I really enjoyed seeing how Marvel waited until the Civil War movie had its time in theaters so box office sales weren't affected by the comic. Think about it. If fans saw that Captain America was merely pretending to be an Avenger, why would they even want to watch the movie? Well played Marvel, well played.

After the news hit, Chris Evans, who portayed Captain America in the movie, took to social media to showcase his thoughts on the epic plot twist:

Even long-time Marvel writer and editor Stan Lee had this to say during a MegaCon panel over the weekend:

All in all, the marketing behind this reveal couldn't have been done any better. It created the exact buzz Marvel was looking for, whether it was good or bad. It's gotten people talking about Captain America.