Corpse Party has had quite the interesting life. First created via an RPG Maker the mystery horror series soon saw ports and remakes via PC, the PSP, PlayStation Vita, and iOS devices, as well as various manga and anime adaptations. This year, to celebrate the game's 20th anniversary Corpse Party is heading to the Nintendo 3DS.

Revamped and remastered for the Nintendo handheld Corpse Party takes you to a Japanese high school known as Kisaragi Academy. A group of friends start telling ghost stories, with one of them suggesting they perform a special BFF charm known as "Sachiko Forever After." As soon as the charm is completed an earthquake opens up the classroom floors, sending everyone down. Upon landing the students find themselves in an alternate dimension, where the haunted Heavenly Host Elementary School still exists and contains the ghosts of murdered children. 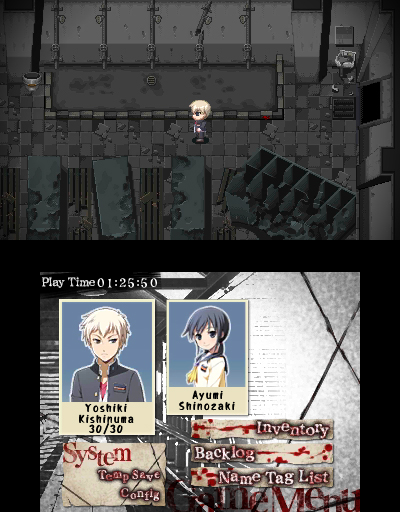 Corpse Party is not a battle-based adventure game. Instead the main objective is to explore and discover the various areas of the elementary school and either find a way out to open the next chapter or -- the more fun route -- figure out all the different ways the students can die in these haunted hallways. As you play the game you'll find hidden goodies throughout the areas, as well as some audio clues thanks to some cool virtual sound techniques.

From what I experienced in the demo, this latest remake is shaping up to be a great way to celebrate this series' milestone. With its level of mystery and so-gory-it's-funny horror fans new and old will surely find a very good reason to dive into one of Japan's biggest cult sensations. Just don't play with the light's off...unless you want to up the scare factor the game features.