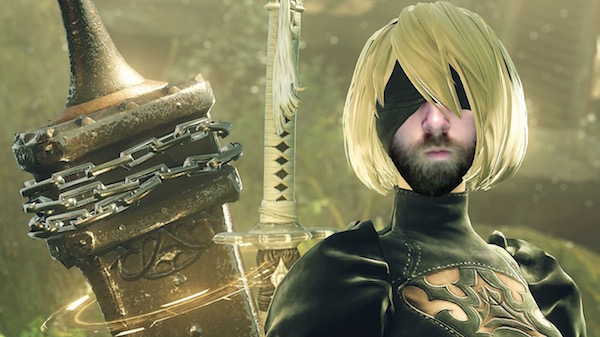 Normally, I like to write these entries on platinum trophies that are either easy, hard or interesting in some way. Nier: Automata is an narratively brilliant game that does some really great things with its story and by the end of my play-through, I felt like I was pretty done with it. It was at that moment, I heard about something intentionally built into the game by the developer that made me want to go ahead and get the platinum. I'll get into what that is and how it made me feel in a bit, but suffice it to say that this alone made this game worth writing about.

This is actually kind of a difficult question to answer. If you're planning on playing this game to completion anyway, then you'll have very little resistance to grabbing the platinum after you're done. This is going to set you back at least 20-30 hours, which is by no means quick, but if you were already going to make the journey, then there should be nothing holding you back. Nier: Automata is one of the best games out this year, so the amount of time should not be too much of a factor here. (5 out of 10)

Okay, here's where I'm going to get into the nitty gritty of why I went for this platinum trophy. After completing the game to the final ending, if you going back to the resistance camp, one of the characters there will have a new dialogue option. This will give you the chance to buy, with the in-game currency, any trophies you have not yet earned. So, at that point the only thing standing between you and the platinum is some easy to farm currency. The main game is not particularly hard, I played it on normal difficulty, so overall I have to say that difficulty is not an issue here. (9 out of 10)

Again, this is kind of a difficult question. I have done several things, many of them could even be construed as cheating, to obtain a platinum trophy. This method, simply buying them from an in-game vendor, was literally implemented by the developer as a legitimate way of getting the platinum and I have never felt more guilty in the process. Through a combination of knowing people who got it legitimately and not actually accomplishing the tasks on the label for the trophy, I honestly felt terrible every time one of those purchased trophies popped. I am not saying that you should feel bad getting it this way, in fact the developer stated that he put it in there so folks wouldn't have to worry about them. The game itself is definitely fun and worth your time, but popping those last few made me feel super icky. (4 out of 10)

I'm not entirely sure what triggered my guilt this time around, but it affected me to the point where I had to write about it. I tied rubber bands to my controller for the Rocket League platinum. I have the platinum for Sound Shapes three times, because all you have to do is sync your cross-save. I have the platinum for My Name Is Mayo. I guess what I'm trying to say is that I've done some interesting things to get those shiny trophies, but for whatever reason, buying them with in-game currency was the line my mind didn't want to cross. Check out Nier: Automata today and buy yourself a platinum trophy, if you dare!