A new Legend of Zelda game has been a long time coming.  So much that when the trailer started running at the beginning of the press event, I was excited, but not all that surprised.  It was thrilling to see one of my childhood heroes, Shigeru Miyamoto, burst from behind a screen to demo the newest game in one of my favorite series of all time.  Other than the trouble with Deku Baba, the plant monster, the live demo was very exciting to see all the new bits that would be populating Link and Zelda’s new adventure. 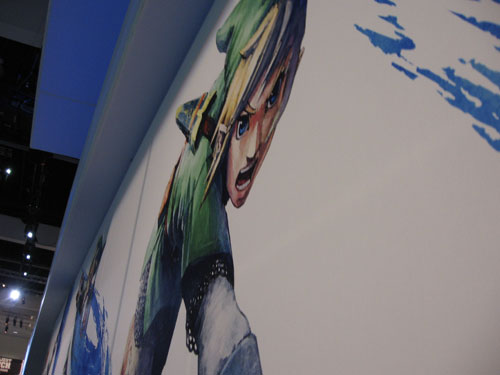 At the end of the press event, just after everyone was invited to take a quick look at the 3DS, people were also invited to come up to give the new Hyrulian adventure a try.  After I got my hands on the 3DS and the lady pried it from my hands with a crowbar, I got in line to see The Legend of Zelda: Skyward Sword in action and, as I’d hoped at the time, play it.  Unfortunately for yours truly, when I was one person away from being able to play, they pulled the plug on the demo.  Sure, I was sad I didn’t get to play it right then, but one very long line and a t-shirt later, I did get a chance to get my hands on the game.

The big hook of The Legend of Zelda: Skyward Sword is that it incorporates the Wii Motion Plus controls to give you more direct control of Link.  Swing your mote out to draw your sword, tilt and swing your blade with 1:1 accuracy and use the remote to feel around you to reach inside your pockets for items.  To be fair to Mr. Miyamoto, I had a bit of trouble with the Deku Baba as well.  The trick, I discovered, was that after a few seconds drawn, your blade begins to glow and you can shoot a vertical or horizontal beam.  There are also doors that have a big eye on them, that you can make dizzy by spinning around your sword.  Upon slicing the dizzy eyeball, the door opens and you can advance. 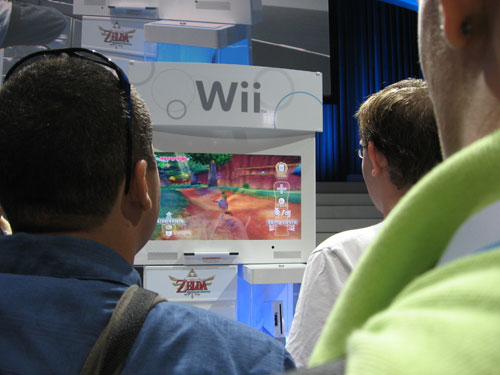 All of the new toys that Link gets to play with in the new game look to be quite a bit of fun.  One in particular that stood out was the Beetle, which you can launch from a gauntlet on your hand.  You then control its flight as you go around and pick up items and deliver bombs.  Speaking of bombs, thanks to the joys of motion plus, you have multiple options for how your bombs can be delivered.  You can either throw them overhand, the way Link always has, or bowl them underhand to get past those pesky walls.

The enemies are your standard Legend of Zelda baddies.  There are killer plants, bats, evil pigs and giant spiders to battle against.  Most are fairly easy to dispatch, but the new sword controls make it a lot of fun.  The thing that may have me most excited is the new art style that has been given to the world.  Almost like a nice balance between the styles of Okami and The Legend of Zelda: Twilight Princess it has a light airbrushed feel to it that makes the world feel like a painting while not being too overbearing.  The game runs at a beautiful 60 fps and doesn’t skip a beat.  I look forward to hearing a bit more about the story, but I’m sure there is plenty of that to come while we endure the wait until it comes out.

While I did end up having to wait in two separate lines to play the game just once, I’m definitely excited to see what it will bring to table.  In 2011, hopefully on the earlier side, we’ll find out.  Make sure to remember that impaled TVs don’t play The Legend of Zelda: Skyward Sword very well, so always put on that strap!