HomePodcastESH Podcast # 314: Will The Death Star Get Big Round Ears
Podcast 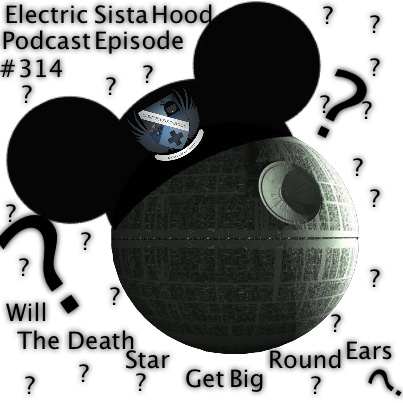 ESH Podcast # 314: Will The Death Star Get Big Round Ears

It is so hard to cover ever awesome thing that happens in the nerdverse, but our lovable sistahs do it with as much class and sass as they can muster. Panda spent some time with real people this week as she wandered again into the world of Table Top Gaming. Cards Against Humanity and Flux caught her attention. one for it's hilarity, and the other for ultimately made her want to dig out her grey matter with a spork.

Ninja talked about her latest present to herself--iPad Mini. Panda zoned out during that part of the show...she thinks. Ninja talked about another zany anime that brought Panda back from her apple coma called Ebiten. While on the subject of Ninja, she always talked about her assassinating skills in Assassin's Creed 3, her dance moves in Dance Central 3, her movie adventure with Wreck-It Ralph.

However at the end both of them shared some words about Disney buying LucasArts.

Before getting to good stuff there weren't that many "would be" titles- but we are going to share them anyway:
Anime Roulette Can Be Dangerous

Like Adam West Down the Batpole, Conner Changes When He Comes Out of the Haystack

Now without further ado Here is this weeks ESH Podcast Episode 314: Will The Death Star Get Big Round Ears?

What (I Think) You Should Watch Th...