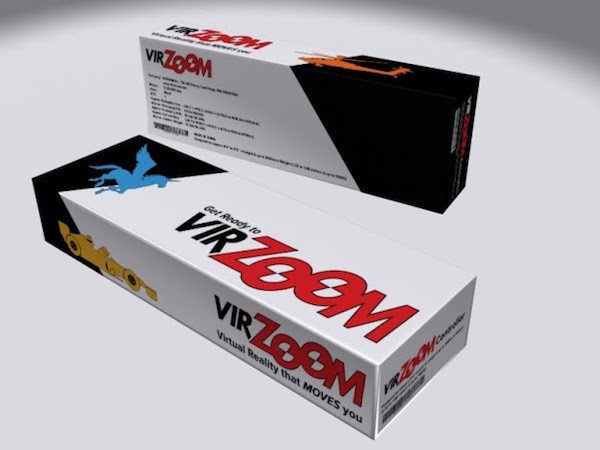 Exercising has always been a major chore for me. Not long after I get started sweating, I just can't seem to get the stress of the workout off my mind. I've tried everything from music, TV and even playing games with a controller. Nothing seems to be able to do the trick, with some even causing some slight danger, but I think I've found the answer. I tried out a new product called VirZOOM, a VR exercise bike, and it appears as though someone has finally found a good solution to making a workout more fun. 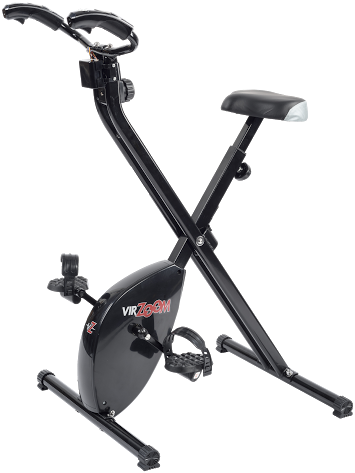 The VirZOOM bike looks like a fairly standard exercise bike at first glance. When you look a bit closer, you'll notice that each handle has controls on it. Pair that with its ability to track how fast you're pedaling and you've got potential for some fun games. There were five games, all part of the VirZOOM Arcade, that I was allowed to try during the demo. The varying speeds of each makes them perfect for the different intensities you need to create a good workout, which they've integrated as well.

The first game I played put me on the back of a horse riding through a dusty ghost town. The faster I pedaled, the horse's pace would increase. I could also steer my trusty steed by simply tilting my body in the desired direction. My task in this game was to hunt down some low-down varmints and pull them off their horses. I had both a lasso and a special dust tornado to help accomplish this task, both of which could be activated with the trigger on the VirZOOM handles. 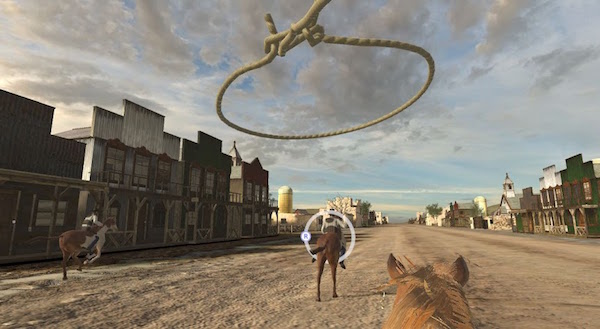 Next up, I found myself sitting in the driver's seat of a race car. As I glanced to my right to check out my competition, I noticed there were adorable puppies driving all the other cars. Then I happened to glance in my own rear-view mirror and found that I myself was also an adorable puppy. This one was more of a standard racing game, with controls very similar to the horse game. The pace, on the other hand, was much more fast with this one and gave me the hardest workout of all of them.

Slowing things down for a bit, the next portion from VirZOOM Arcade put me in control of a tank. Pedaling to climb over hills, I aimed my canon at far off targets by moving my head, squeezing the trigger to fire. Online multiplayer is planned for this mode, allowing folks controlling their tanks to blast each other while getting their workout.

Dialing back the intensity and violence, my next demo involved riding atop a pegasus. As you pedal, the pegasus begins to run, until all of a sudden you've reach the edge of a cliff. Throwing caution to the wind, you just keep going and upon holding in the trigger, the horse begins to fly. You can slow your pedaling to drop slowly, or go for a dive by letting go of the trigger while in the air. My next task was to collect some crystals located on an island, so I dove downward while flying forward and managed a soft landing near the collectibles.

Rounding out the collection, my final experience involved piloting a helicopter. Riding through a canyon and pedaling at various speeds to maintain my height, I found myself once again aiming ballistics with my head. Like the tank mission, I found myself slowing down a bit more for this one, stopping occasionally to aim. After blowing up the last of my foes, I found myself at the end of my journey. 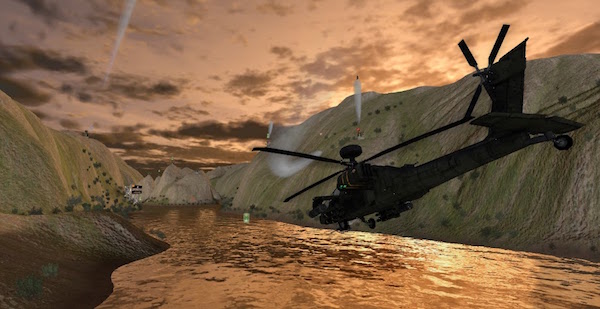 Nothing will make you completely forget that you're exercising, but I sure did get a lot of pedaling in while messing around with the VirZOOM. According to the representative I spoke with, these games are just the beginning for the VirZOOM Arcade and they will continue to support it after its launch next week. VirZOOM even provides an SDK for anyone that wants to create new content using the Unity or Unreal engines. It is even compatible with all the major VR headsets including the HTC Vive, Oculus Rift and PlayStation VR headsets. Check out more info for yourself on the website at www.VirZOOM.com.